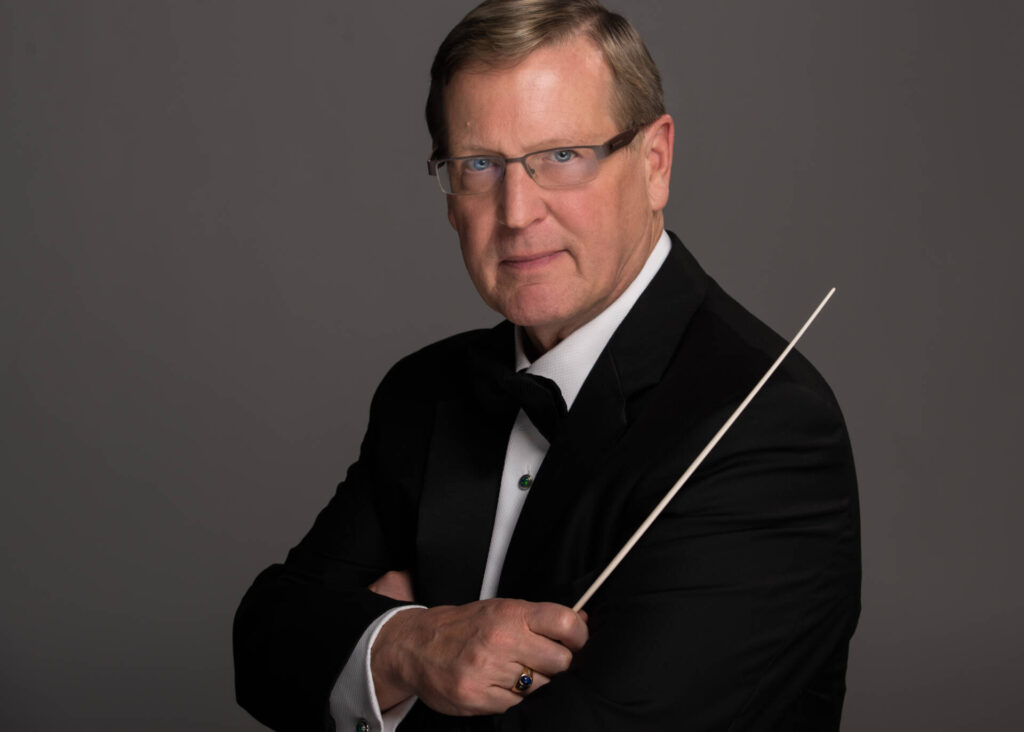 During his tenure, Canterbury Voices has grown into one of the premier choral organizations in the Central United States, known for its innovative programming, commissioning of new choral works, and masterwork performances. “I have been so fortunate to lead this amazing organization of choral artists. I am proud of the music we have created and the legacy of great choral music we have left to Oklahoma City.”

Under Ellefson’s direction, Canterbury has expanded its repertoire, increased membership in the ensemble, and presented five world premieres (works by Jerod Impichchaachaaha’ Tate, Stephen Paulus, Dominick Argento, David Janssen, and Edward Knight). At Oklahoma City University he has directed the Chamber Choir and the University Women’s Chorus, and taught courses in the graduate choral curriculum. He has conducted many significant works, including Verdi’s Requiem, Mendelssohn’s Elijah, Handel’s Messiah, Bernstein’s MASS, Britten’s War Requiem and Brahms’ Ein Deutsches Requiem. The chorus has collaborated with choral greats, including Dominick Argento and Dan Forrest, performing often with the Oklahoma City Philharmonic, and has shared the stage with Dave Brubeck, Kelli O’Hara, Barry Manilow, Ron Raines, Gabriel Preisser, Sarah Coburn and Andrea Bocelli. With Ellefson, Canterbury has toured internationally in Ireland, France and China, and in 2020, he formed the Canterbury Chamber Voices.

About his retirement from Canterbury Voices, Ellefson said, “I want to thank the many singers of Canterbury who have sung throughout the years and made Canterbury Voices what it is today. I’ve been so honored to stand before you and create music with you, and I will cherish the memories and years in this wonderful city with a profound sense of gratefulness.”

Canterbury Board President Mark Clayborn said, “On behalf of the Board and Canterbury Voices, I want to sincerely thank Randi for his countless contributions over many years. We are thankful for the time he has shared with us. His retirement is well-deserved after his long and impressive tenure. The mission of Canterbury Voices will continue and grow as we move forward to a new chapter. In addition, the partnership we have shared with Oklahoma City University has empowered two Oklahoma City institutions the ability to provide our city with world-class, choral music education, and for that we are truly thankful.”

Dr. Randi Von Ellefson has served as Professor of Music and Director of Choral Activities at Oklahoma City University and Artistic Director of Canterbury Voices since 2004.  Under his direction, Canterbury has expanded its repertoire, increased the number of singers in the ensemble and presented five world premieres (works by Jerod Impichchaachaaha’ Tate, Stephen Paulus, Dominick Argento, David Janssen and Edward Knight). At Oklahoma City University he directs the Chamber Choir and the University Women’s Chorus, two of the five choirs on campus, and teaches courses in the graduate choral curriculum.

He holds degrees from Texas Lutheran University, the University of Minnesota and Arizona State University. He is a founding member of the National Collegiate Choral Organization (NCCO). When he assumed the Presidency in 2016, he became the only person twice elected to that post.

He has taught choral music since 1977, beginning his career at Bethany Lutheran College (MN), Whitworth University (WA) and the University of Chicago (IL). Dr. Ellefson also was artistic director of the Elgin Choral Union (IL), the Spokane Symphony Chorale (WA) and was the first conductor of the Spokane Opera Company. While in Spokane, he also was conductor of major Holiday Concerts, Cathedral Concerts and other Pops with the Spokane Symphony Orchestra. He served St. Mark’s Lutheran Church as Director of Music and is currently choir director at Chapel Hill United Methodist Church in Oklahoma City.

Dr. Ellefson has been a guest conductor and professor at the Hochschule für Musik in Munich, Germany and taught at Payap University in Chiang Mai, Thailand. He has been president of the Northwestern and Central Divisions of the American Choral Directors Association (ACDA) and served in leadership roles in the Music Educators National Conference (MENC) and the National Association of Teachers of Singing (NATS).

Randi Von Ellefson has conducted many all-state choirs, had choirs perform at state, regional and national conventions of MENC and ACDA, served as an adjudicator at national choral competitions and led choirs in national and international tours in Europe, Asia, Australia and Russia. Reviews (in Fanfare and Gramophone magazines) of choral performances and recordings have noted a particular ability of his choirs to “sing from the heart” and “express significant emotion and depth of feeling” while “maintaining superb intonation and technical precision.”

In the summer of 2014, Dr. Ellefson was part of a group of seventy from Canterbury and Chapel Hill United Methodist Church who traveled to Paris to perform the Fauré Requiem at the Church of the Madelaine where it was premiered. The group also joined many other choirs at Normandy Memorial on July 4th to sing and commemorate the 70th anniversary of the D-Day Invasion and Liberation of France by the Allied Forces. Canterbury Voices was recently selected as the American Prize Winner in Choral Performance, Community Division for 2022.